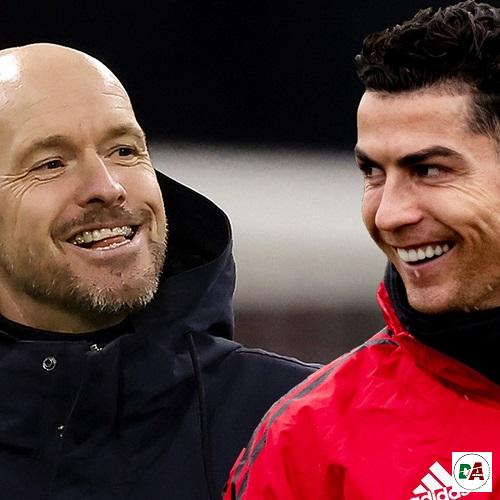 ‘We made a statement and nothing has changed,’ said Ten Hag ahead of Friday’s friendly match against A-League outfit Melbourne Victory at the MCG.

Erik ten Hag was in no mood to talk about Cristiano Ronaldo’s future as Manchester United’s pre-season tour arrived in Melbourne.

The Portuguese star isn’t on the trip amid speculation over his Old Trafford future and the Dutch coach gave short shrift to a press conference question about the 37-year-old’s plans.

United continue to insist that Ronaldo is not leaving the club but it is no clearer as to whether he will link up with the rest of the squad on their three-match Australian leg of the tour.

Ronaldo has asked to leave United, who will be playing Europa League football in the season ahead, should the right offer come in and he isn’t on the tour after being granted compassionate leave for personal reasons.

Ten Hag said in Bangkok: ‘We are planning for Cristiano Ronaldo for the season and that’s it. I’m looking forward to working with him. Cristiano is not for sale. He is in our plans and we want success together.’

The Dutch coach added: ‘He’s not with us and it’s due to personal issues.

‘I spoke with him before this issue came up. I had a conversation with him and I had a good talk. That is between Cristiano and me.

‘What I can confirm is we had a really good conversation together. I didn’t speak to him after (the news).’

In Ronaldo’s absence, Anthony Martial, who spent the second half of last season on loan at Sevilla, led the line and scored in the win over Liverpool. He was replaced at half-time by youngster Amad Diallo.

If Ronaldo did leave just one year into what could be a three-year second stint at United, they could potentially be left short of goals after the Portuguese scored 24 times last season.

The only other United player to reach double figures was Bruno Fernandes with 10 goals as the likes of Marcus Rashford and Edinson Cavani misfired.

United appear to be no closer to signing a centre forward but insist Ronaldo won’t be going anywhere.

Having started pre-season in encouraging fashion against Liverpool, United are now in Australia for three-matches.

They take on A-League side Victory at the Melbourne Cricket Ground on Friday and then play Crystal Palace at the same venue on Tuesday before heading to Perth to face Aston Villa on July 23.

A friendly with Atletico Madrid in Oslo on July 30 and then Rayo Vallecano at Old Trafford the following day round off their pre-season before the Premier League begins at home to Brighton on August 7.