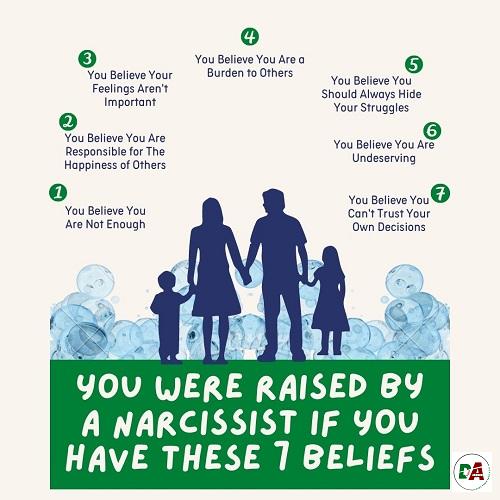 We are the product of our upbringings. The beliefs, feelings, and coping skills we develop as children influence who we grow into as adults. And the impact of your upbringing doesn’t just go away, no matter how old you get. It leaves an imprint on you and affects your behaviours and beliefs. This article outlines 7 beliefs that appear to be common among those raised by narcissistic parents. Recognizing these beliefs is the first step toward healing.

1. You Believe You Are Not Enough

If you were raised by a narcissist, you learned to believe that you are not enough. You may have been criticized for your appearance or abilities, ignored when it came to your achievements and accomplishments, or expected to be perfect. If a narcissistic parent ever does praise their child, it’s typically insincere and intended to make the narcissist look good.

When you grow up in such an environment, you begin to believe that there is something inherently wrong with you. You learn that your worth depends on what others think of you, so validation from someone outside yourself becomes paramount. You feel like you have to prove yourself over and over again because deep down inside, it really feels as though no one likes or loves you for who you are, even if they say otherwise.

2. You Believe You Are Responsible for The Happiness of Others

A narcissistic parent often expects you to be an extension of themselves; to be there for them at all times and make them happy in whatever way they require. As a result, you may have learned that getting love from others requires pleasing them first and foremost.

You might feel like you need to protect other people’s feelings by avoiding conflict or speaking up, even if doing so would benefit everyone involved. You believe that love is conditional; something that can very easily be taken away from you or withdrawn at any moment based on how well you please others with your actions and behaviours or lack thereof.

3. You Believe Your Feelings Aren’t Important

You learned that your emotions are something to be ignored or criticized, not validated and supported. Narcissists love a good pity party, but they rarely step up to show support and comfort when their children are upset. In this way, narcissists teach their children that they should expect little empathy from other people throughout life, which sets them up for repeated disappointment as a result of this expectation.

4. You Believe You Are a Burden to Others

If you were raised by a narcissist, there’s a good chance that you believe you are a burden to others. Narcissistic parents tend to make their children feel guilty for having basic needs or desires like asking for help with homework or complaining about the temperature being uncomfortably low in the house.

In fact, if you bring up any of your needs, the narcissist will likely become angry and punish you for being selfish or taking up too much space. Over time, children will internalize these beliefs and assume that they need to live up to their parent’s expectations in order to be acceptable members of society.

5. You Believe You Should Always Hide Your Struggles

If you were raised by a narcissist, one of the most damaging things they did to you was teach you to hide your struggles. They didn’t want their image as a perfect parent challenged, so they made sure that in front of other people, everything was perfect.

You learned at an early age that problems were not allowed; if anything was wrong or if you had any issues, you were told it was because of something wrong with YOU. And since narcissistic parents often shame their children for having issues, it makes it harder for those children to open up about things in the future. This can include anything from financial difficulties to mental health issues to relationship problems.

6. You Believe You Are Undeserving

Most people believe that they are deserving of love, happiness and success. But if you were raised by a narcissist, chances are that you don’t feel worthy of any of these things. It’s because you were punished or demeaned for expressing any thoughts about yourself, or for daring to think good things about yourself.

Narcissists do everything in their power to make their children feel undeserving. They make their kids feel like they’re not good enough for anything, including love and attention from their own family members. As a result, you don’t feel worthy of anything good that happens in your life, because you feel like you don’t really deserve it.

7. You Believe You Can’t Trust Your Own Decisions

If you were raised by a narcissist, you may have internalized their negative messages. You simply don’t believe your decisions are good enough. This can lead to a lack of self-confidence, which can make it difficult for you to trust your own judgment.

This is because narcissists are often critical, blaming and rejecting parents. They can also be extremely competitive with their children, and belittle them in an attempt to make themselves look better in comparison. These behaviours have the effect of making you feel insecure about your abilities. A narcissistic parent can leave lasting scars on your psyche, and it’s important to recognize these scars, so you can start to heal from them.

If any of these things resonate with you, consider getting help by speaking with someone who knows how these relationships work, whether it’s a therapist or a trusted friend who has been through a similar experience.