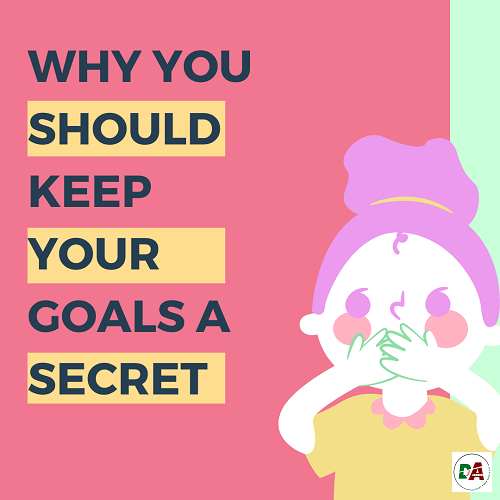 You’ve probably heard the advice that you should write down your goals. There’s plenty of research indicating that writing them down can improve your chances of achieving them. You might also be familiar with the idea that sharing goals with others can have an even stronger effect on success rates. While this advice may work for some people in certain situations, researchers have found that sharing your goals in general might actually make you less likely to achieve them so keep reading to learn more about why you should keep your goals to yourself.

1. You May Get Talked Out Of It

One of the most common reasons why people share their goals is that they want to get support from others. They think that by telling someone about their goals they’ll be more likely to achieve them. Sure, you may end up with helpful friends who are supportive and encouraging as you work toward a goal but there’s also a chance they could try to talk you out of it

They may say things like ‘your goal is too unrealistic and not worth pursuing’, ‘you’re too old’ or that ‘you don’t have the means’. In reality some people’s own feelings of inadequacy will make them feel a little less inferior if they can point out your flaws and limitations and by doing so, they can sabotage your chances of success as well

2. You May Be Constantly Asked About Your Progress

One downside to openly sharing your goals is that other people may start setting expectations for you. They’ll expect progress reports which is fine if you want their feedback but if just having someone ask how your goal is going makes you feel stressed out, don’t invite that pressure into your life.

Another downside is that by putting too much pressure on yourself and making too big a deal out of something you’ll get more attention than necessary and possibly unwanted advice from those who may not know much about the intricacies of your particular goal.

3. Those You Think Care May Be Less Supportive As You Near Your Goals

People may give you the impression that they care about your goals but when it comes down to it, not everyone is ready for you to achieve them. Some people might feel like they’re losing a friend or family member if you succeed. They may not be happy with the new version of you either since you’ve been freed from the shackles of mediocrity.

Maybe they’ve always seen themselves as better than you and don’t want their worldview changed by your achievements and some people are just jealous in what they see in others. They simply can’t stand seeing someone else shine. So, before you tell anyone about your goals make sure that these people are truly supportive of your dreams and aspirations.

4. People May Take Your Idea and Run with It

Perhaps this may be the biggest reason not to share your goals with anyone. If people find out what you’re working on and think it sounds like a good idea, they may take advantage of that and steal your idea or even try to claim credit for it as their own.

Your ideas are valuable so you should take care to protect them. That’s why you shouldn’t share them with anyone who won’t be a key player in helping you achieve your goals. At the very least, try to control who gets access to confidential information and only share details with people you trust

While the process of articulating your hopes and dreams can be very powerful it also has the potential to jinx them in ways you may not realize. You see, the more you talk about your plans the more likely you are to doubt them.

Talking about your goals can make them seem less important or make it seem like they aren’t working out or are farther away than they actually are. This can cause doubts to creep into your mind which makes you feel like giving up because it seems too hard or you won’t think it’s possible anymore

You might think that telling people about your goal will keep you accountable. This can be true but there are some downsides to this as well especially if you end up changing your mind. Perhaps you realize that what you wanted to achieve isn’t as important as something else where the goal is not relevant anymore because of external factors and has no purpose or maybe just maybe there’s an opportunity for you to do something even better than what you originally set out to do.

If we share our goals with others and then don’t follow through on them, we’re often blamed for failing to accomplish them and then we’re expected to explain ourselves. People may even stop believing in you all together because they assume you either aren’t committed enough or aren’t capable of achieving goals even though neither assumption could be farther from the truth.

7. If you do fail people will happily remind you of it

When you tell others your goals, you’re making yourself vulnerable in a way that makes you more susceptible to negative feedback later on if things don’t go as planned. In fact, if you’ve told people about your goals and have now failed, they’ll be happy to remind you about how much work there is left for you to do.

It’s hard enough to admit failure even if it’s only temporary but things get even worse when those failures become public knowledge. The more people know about your goal-related failure the harder it becomes for you to forget about your mistakes. The less hope for success seems in sight and the further away from achieving a goal feels the more tempted you’ll be to give up on trying all together.

At the end of the day talking about your goals won’t get you any closer to achieving them only working toward them will.

Now if telling people about your goals is important to you then by all means do it. Just make sure you discuss it with somebody who will actually encourage you and motivate you to achieve them

You Were Raised By A Narcissist If You Have These...