Home » Article » Relationship » Why Do 90% of Men Look Unattractive?
Relationship

Why Do 90% of Men Look Unattractive? 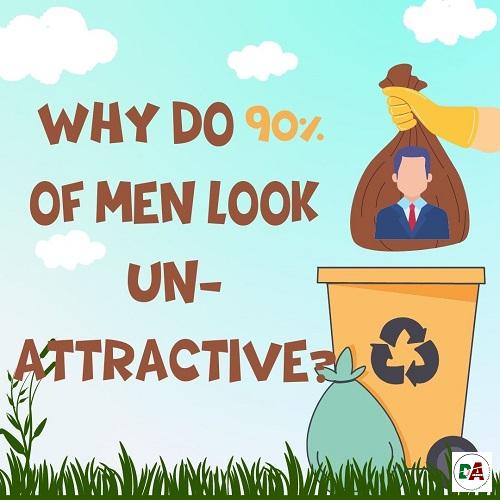 It is because men don’t need to be attractive. It’s a law of supply and demand. Women find mates by putting effort into their assets: being interesting, focusing on their appearance, developing their charm, and using their intelligence. Men find mates through sheer persistence and finding absurd amounts of self-confidence in their mediocrity.

There was this guy whose roommate went on a date almost every night. He wasn’t terribly good-looking and came across as shy and aloof. When asked what his secret was. He said that he asked out about 25 women every day. The vast majority turned him down, of course, but plenty was flattered by his confidence, charm, and courage. He wore loose-fitting black t-shirts and jeans. He rarely smiled unless there was a woman he was trying to charm. His example was not unique. You see this same dynamic playing out over and Over don’t you?

Every time you ride the bus there are numerous unattractive men hitting on women. Sorry to break your bubble guys, but the truth is few people are truly beautiful or truly ugly. This is in regards to both genders. Why? Because there is something called the bell curve and the bell curve is where a huge portion of society falls in terms of looks, IQ, education, income, etc.

Either you have extremely high standards for beauty/handsomeness, if not technically everyone is about the same level in terms of looks. Seriously, go out and look around, are there truly ugly people? Do remember also where you live will also dictate the percentage of beautiful people.

Now, however, women, in general, look better than men, meaning their bell curve could be between the rating of 5–7 while men’s bell curve is maybe 4–6. Why is this so? Because women use cosmetics to look good and men don’t. One would expect the cosmetics to be effective or else why would they cost so much?

Don’t forget the plethora of other beauty products from plastic surgery, bracers, curling hair, double eyelids, coloured contact lenses, etc. All of which are tailored mostly to the female population since men take less interest in it. The way women look at men is fundamentally different than how men look at women. Women often won’t believe a guy is attractive unless they are attracted to them on multiple levels. They don’t function based solely on looks. They need the mental and emotional to be just as appealing.

Guys can literally get off on just the looks of a woman. Most women can’t. It’s why guys gravitate towards p*rn more than women.  Guys are just visual by nature. Women, when it comes to adult content, often need more neutral ones. Images of couples doing the stuff that they want to be doing. Often they would prefer it to at least have the faces look realistic and not too “movie-like”.

Women want to see videos where they can place themselves and whatever guy they are attracted to in that scene. They don’t look at p*rn for the people in the video. They look to add to my imagination of what it might be like with so and so.

There are guys who would happily look at adult content all day. Doesn’t much matter what woman is in it, but it all “works”. Women don’t tend to look for nude men to stare at to help themselves get off. They are sitting there thinking and their mind is on the guy they are attracted to in real life, not some p*rnstar. Hope that makes sense?

It’s not that they don’t find guys attractive, it’s that they go, well, if their personality and everything also mesh, maybe they could run with that.

The other aspect of supply and demand is that young men and women are pretty evenly matched for finding mates. As men age, the odds shift in their favour as hormones tell humans to reproduce and available men do not need as many qualifications to be a suitable mate. And as men shift into their 40s and 50s, they can actually date younger women and still be unattractive while women must try harder and harder to find suitable mates as they age. So, in short, the patriarchy upholds a standard where men don’t even have to be attractive to find a mate.

Why You Should Stay Single in Your 20s

The No. 1 Mistake No Man Must Never Make

Is Your Relationship Affected by Your Appearance?