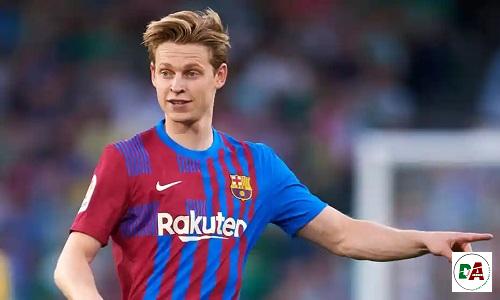 Frenkie de Jong has agreed to join Manchester United from FC Barcelona, according to reports.

Signed from Ajax for €75mn ($79.6mn) in 2019, the Dutchman has been the subject of transfer speculation since the end of last season.

Last weekend, SPORT reported that the Red Devils expected an €80mn ($85mn) deal to be closed in a matter of days while “very close” to signing their target.

On the following Friday in Catalonia, that same daily newspaper claims that De Jong has given is ‘OK’ to the operation “after a few weeks of many doubts”, and The Athletic in the UK have also alleged that De Jong has admitted to being open to a move to United in private.

With De Jong apparently seeking Champions League football which United cannot offer at present, it is said that the player and his environment were waiting for proposals to perhaps come in from the likes of Bayern Munich, Paris Saint Germain or Manchester City. As these haven’t been forthcoming, however, the 25-year-old is now gearing towards a switch to Old Trafford.

The Athletic says that United are hesitant to pay €80mn ($85mn) for De Jong, however, finding that figure to be out of sync with the current transfer market.