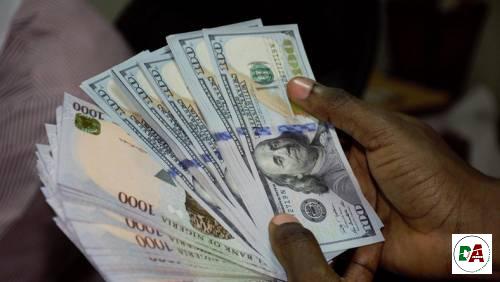 Between June 2021, and June 2022, dollar-to-naira exchange rate has risen from ₦500 to ₦603 at the parallel market, signifying the greenback appreciated by 21 per cent within the period.

The margin between the official and the parallel market rates on Tuesday was ₦187.28, a situation believed to be fuelling arbitrage and worsening an already bad FX supply situation.

At the Importers and Exporters (I&E) widow, a dollar exchanged at ₦415.72, gaining ₦5.53 in three days. But year on year, the naira weakened by nearly one per cent in relation to the dollar, rising from ₦411 to ₦415.72

One of the Bureau De Change operators at Zone 4, Abuja, which is the hub of the forex sales at the Federal Capital Territory, Mohammed Isah, gave the price of dollar as ₦604/$, lamenting that the rate had failed to fall after the primary elections conducted by the People’s Democratic Party and the All Progressives Congress due to party delegates’ refusal to sell.

“We expected to see more dollars in the market after the primaries, but nobody is selling. That is why the rate is still the same for more than a week,” he said in pidgin English.
Another BDC operator at Abuja airport, Usman Dantata, who was willing to sell at ₦603/$, said many individual buyers who wanted more than $5000 on Tuesday were unable to get it due to a worsening scarcity being experienced in the market.

“If you have dollars, bring them, I will buy them at ₦601 each. One PDP delegate told me that he will keep his dollars till the rate reaches ₦800,” he said, also in pidgin English.
Another BDC operating at Amuwo Odofin in Lagos, Bala Abdullahi, gave his rate as ₦602. On average, the dollar closed at ₦603 at the parallel market and has not fallen below it since May 17 when it hit N600 at the parallel market.

Nigeria is experiencing one of its worst FX crises in history due to demand overshooting supply. Oil price has risen above $110 per barrel in the last two months owing to Russia’s invasion of Ukraine, but Nigeria has failed to increase its earnings from it due to oil theft, low production and an opaque subsidy regime which will gulp ₦4 trillion this year.

Nigeria’s crude oil earnings are also blurred by lack of a local refining capacity as much of its FX goes into overseas crude refining.

Nigeria’s crude oil earnings are also blurred by lack of a local refining capacity as much of its FX goes into overseas crude refining.

The country is not earning enough from its non-oil exports either. It earned $45.56 billion in 2021 from crude and non-oil sector within the same period, according to the National Bureau of Statistics.