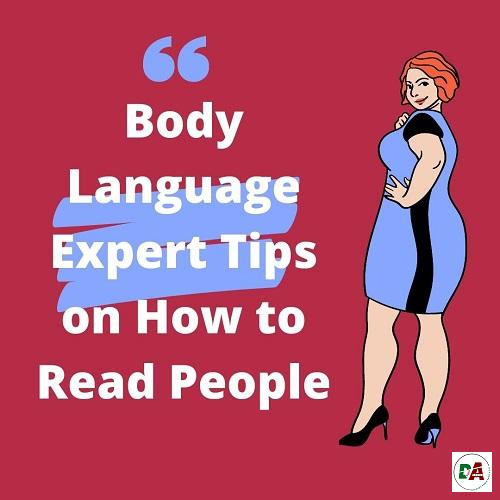 With all of the ways we communicate with each other, it’s easy to forget how much information we give away non-verbally. In fact, most people are unaware that they display a number of body language signals that reveal their true feelings. Therefore, one of the easiest and most powerful ways to read people is by paying attention to their body language!

You can tell a lot about someone by observing the subconscious messages they’re sending through their physical body from facial expressions to gestures, posture, eye movement, and more. This handy little skill can help you better understand other people’s behaviours and motivations, which is critical in your relationships, business, and everyday life.

While it may sound complicated, learning to read people is quite easy with the following simple steps!

The first step to reading someone is to establish a baseline; the person’s normal behaviour. Do you know whether that person tends to gesture with their hands? Are they known for slouching? Do they have a particular facial expression that signals anger, one that another person might interpret as neutral? These are all things you want to pay attention to before you start looking for signs of interest or deception.

If you’re meeting someone for the first time, say on your first day at a job or in a new class you just signed up for, the easiest way to establish a baseline is by observing them in conversation with someone else. Pay attention to their facial expressions and gestures, posture, and movement. Once you’ve got an idea of what normal looks like for this particular individual, it’ll be easier to spot deviations from this norm.

Most of us have a slight bias against strangers, which is totally natural. Some might also have biases based on factors like age or physical appearance. However, it’s important to be aware of how these biases might affect the way you judge someone’s body language and facial expressions so that you can compensate for the effect of your own prejudices.

It’s also important to be conscious of others’ cultural biases. People from different cultures may express themselves differently because of their culture so it helps if you’re familiar with these differences before you try to read people from different backgrounds. For example, in many Asian cultures, an expressionless face is considered polite and calm; but in North America, it can often be seen as suspicious behaviour or disinterest.

In order to learn how to read body language, it’s crucial to be able to distinguish between positive and negative signals. Remember that actions speak louder than words. An individual can be conveying one message verbally, while their body language tells a different story. When someone is pleased, they smile, and maintain eye contact.

A leaning forward posture means that the person is interested in getting closer to you and likes what you are saying. In contrast, negative body language shows that a person is not comfortable and this includes looking away, crossing arms and legs, or scrunching their nose.

They might even frown at you or squint their eyes. When someone feels distanced from another person, they also tend to lean back to create more space. For example, if you talk about something that the person is not interested in or does not agree with, they might lean back.

4 – Pay Attention to The Pitch of Their Voice

Voice pitch is a good indicator of someone’s emotional state. So pay attention to how someone talks and how it may change from their baseline voice pitch when telling you something. When people are excited, happy, or angry, it is natural for them to raise the pitch of their voice. For the exact opposite reason, when people feel sad or dejected, they lower the pitch of their voice.

And if it keeps changing every few seconds, that person is probably lying; trying to come up with a good story on the fly!

When someone is feeling relaxed, their breathing is generally soft and slow. But the rate at which they inhale and exhale increases when the person is nervous, angry, or anxious. For this reason, it’s a good idea to pay attention to how their chest and stomach are moving.

If a person’s stomach moves more than their chest when they breathe, you can be confident that they feel relaxed and calm. However, if a person experiences stress or anger of any kind, then the area that rises most will be the chest rather than the stomach.

6 – Pay Attention to Their Movements

Some of the most common body language signs are those that reveal when people are uneasy or showing uneasiness. From shaking their legs to chewing gum, to pacing around a room, any type of movement can indicate some level of anxiety, especially when the movement increases as time passes. Fidgeting is also a big sign that someone might be bored or not paying attention to the conversation.

If a person is gripping something tightly in their hands or if their fists are balled up, they might be feeling stressed out or nervous. People may even hide their hands if something makes them uncomfortable. Lip biting and touching the face can also indicate that someone is feeling uneasy.

7 – Keep Context and Environment in Mind

For example, a person might cross their arms when talking to you if they’re feeling cold; but they could also be crossing their arms because they’re not interested in what you have to say.

Reading people may seem like a skill reserved for FBI agents, television shows, and Sherlock Holmes, but it’s actually very easy to do. It all comes down to your awareness and understanding that everybody gives away certain subconscious clues about how they actually feel regardless of what they may say verbally. What do you think? Are you good at reading people? Or do you struggle to discern what others are thinking or feeling? Share your thoughts and comments below!

Nigerian Flags to fly at half-staff for Owo massacre victims

You Were Raised By A Narcissist If You Have These...