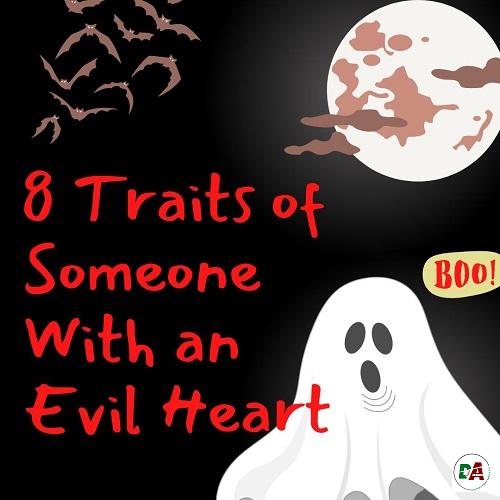 Going back as far as Greek mythology, humans have been fascinated with the concept of evil. And while this kind of fascination is usually concentrated around horror stories, it can also play a role in real life. Evil-heartedness is not just a negative personality trait; it is a general way of being. And we may be surrounded by people who have hidden dark sides, that can be dangerous.

Therefore, it’s important to recognize the signs of an evil heart, so you don’t get taken advantage of by someone with a sinister agenda!

To hide their true intentions, evil people are usually very deceptive in their actions and words. This makes them dangerous to trust because they will do whatever it takes to get what they want. One of the most common characteristics of an evil person is their obsessive need for power over others, which inevitably leads them to manipulate those around them.

It’s not uncommon for a person who has an evil heart to seek out positions of leadership where they have access to resources or people with authority so they can use those positions as leverage against others under them.

A violent temper can be a sign of an evil heart which can be extremely harmful when directed at other people. A person who has an evil heart will find it easy to get angry over the smallest things and will have no problem showing that anger in destructive ways such as hitting or yelling. They may also seek out opportunities to hurt others in order to feel powerful or superior.

3. Lack of Empathy Toward Other Beings

If someone behaves cruelly on purpose or even just doesn’t seem bothered by doing so, then watch out! This indicates that there’s something seriously wrong inside their heart. When someone lacks empathy, they’re not interested in the problems or concerns of others. This kind of behaviour can undercut a person’s ability to develop healthy relationships – that would otherwise allow them to enjoy experiences such as love, friendship, and trustworthiness; all things that require empathy.

Vengefulness is one of the most heinous traits someone can have. A person who seeks revenge wants to hurt someone because they, themselves have been hurt. They believe that if they make the other person suffer, their own pain will diminish. This kind of thinking is a sign of an evil heart not just because it means they’re willing to hurt someone else, but also because it shows that they don’t care about what happens to others. They only care about getting vengeance against those who they believe “wronged” them.

Selfishness, greediness, and materialism are all traits of an evil heart. People like this tend to be the most ambitious and greedy when it comes to personal gain. They will do anything they can to get what they want regardless of how much it hurts other people. They only think about their self-interests and desire for personal gain without any consideration for the welfare of others or their environment.

Jealousy and envy are two sides of the same coin and can make for a toxic combination. Envy is when a person wants something someone else has, and jealousy is when they’re afraid someone is going to take what they have. The evil-hearted will try their best to sabotage whatever success you are having in life. They hate the fact that other people are doing well. There is no room for love or compassion in such hearts so they would rather let others suffer than step back and allow them an opportunity at happiness.

7. A Two-Faced Liar and Cheater

A person with an evil heart will lie to you – and cheat you out of things without batting an eye. They don’t feel any remorse for their actions, and will never apologize either since they don’t think they do anything wrong in the first place. Their two-faced personality often makes them appear to be a good person on the outside, but behind closed doors, they’re doing everything in their power to destroy the lives of others.

8. Takes Pleasure in The Misfortune of Others

Those who delight in other people’s misfortunes are likely to have an evil heart. Whether it’s a story about someone getting injured, or a larger-scale event like people suffering through poverty and war, an evil hearted person might enjoy the misfortune of others simply as a way to amuse themselves, or because it makes them feel like their own lives are better. Whatever the case, these people are always glad when bad things happen to other people. They’re not too concerned about whether or not it’s deserved, as long as somebody else is suffering.

As you can see, a person with an evil heart is one who consciously makes bad choices. It’s important to note that most people don’t fall into this category, but rather are just caught in moments of weakness or temptation. Nevertheless, it’s good to watch out for these traits in people and learn how to recognize them early on, so you can avoid becoming too friendly with such individuals. What do you think? Do you recognize any of these characteristics in someone you know? Let us know in the comments below!

The Secrets To Developing Self Discipline

The 8 Pillars of Masculinity – The Rise of Weak...