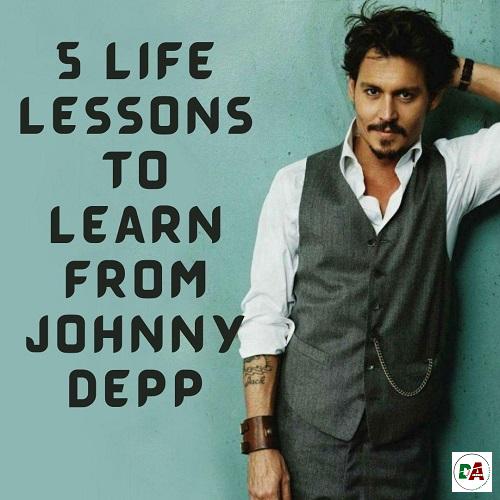 Johnny Depp is the searcher and the seeker of the truth. He has a clear and compelling sense of himself as a spiritual being. As a result, Johnny’s life path is devoted to investigations into the unknown, and finding the answers to the mysteries of life.

Johnny Depp enjoys his solitude and prefers to work alone. He needs time to contemplate his ideas without the intrusion of other people’s thoughts. Johnny is a lone wolf, a person who lives by his own ideas and methods. As a result, close associations are difficult for him to form and keep, especially in marriage. Depp needs his space and privacy, which, when violated, can cause him great frustration and irritation.

Below are 5 life lessons to learn from him

Just when you think you have Johnny Depp pegged; he does a left turn on you. Isn’t life a whole hell of a lot more interesting when you can’t be easily categorized? That there is no neat checkbox for you? Be original. Be unpredictable. Because people crave predictability and a sense of control, you can throw others off balance and even terrify them with random, unpredictable acts.

It’s so much more interesting to be you, even when that means you might be outside the norms of what society accepts when you are being true to yourself and not trying to live up to what someone else wants you to be. Johnny Depp wasn’t comfortable and still isn’t with the sex symbol status that he was labelled with after 21 Jump Street, so he chose roles that were a complete 180-degrees from that.

2. You can be as weird as all get out and people will still love you

It may help that you are handsome in a strange rugged sort of way. There is someone for everyone. Every taste. Every style. If someone believes in you, they will adore you no matter how far off the beaten path you go.

Not saying that being “weird” will make it easy for those around you to love you. You will find your tribe. Even the weirdest kids in high school hung out with the other weird kids.

3. Don’t mess with a good thing

A good partnership can last a lifetime. Johnny Depp has teamed up with Tim Burton numerous times. Successfully. They complete each other and it works. It has not become so predictable that it is boring. The films that they work on have run the gamut. They take the best of their working partnership and apply it to whatever project they team upon. It hasn’t gotten old yet and it is a good example to follow.

If you have something that works, use it. That doesn’t mean you can’t iterate or innovate to improve it, but don’t risk the essence of what is working.

4. Search for a place where you can find yourself

Until recently, Mr. Depp spent most of his time in France in a small village where he grew grapes for wine, and tomatoes in his garden to eat and spent his days with his children and now ex-wife. There were no reporters to hound him, the villagers left him alone, and his privacy was respected which is de rigor in France.

A French life can be one of the simple pleasures, simple tastes, and simple joys. And when one is a star as big as Johnny is, finding peace in a country that encourages and supports the simple things in life can mean all the difference in the world.

5. Never give up your dream to own an island

Again, this may not be your dream, but the point is just because you come from Owensboro, Kentucky doesn’t mean that someday you can’t own your own Caribbean island. You never know what your path is, but if you are determined, you never know where you might end up.

This word seems counter-intuitive in reasons not to give up your dreams, but failure is more beneficial than you might think. Most people don’t pursue their dreams for fear of failure. Little do they know; this is one of the biggest ways we learn and grow. With that failure comes persistence. Persistence is something that can only be learned through hardships. If you never fall down, you can’t learn how to get back up. Each time we pick ourselves back up and forge through, we get a little bit stronger and more capable of achieving our ultimate goals. If your dreams are big enough, you will have stepping stones to success along the way.

Small achievements that can be celebrated and revealed. These small victories can help push you through to the next goal and soon enough, your dreams will be realized.

Cultivate Your Inner Darkness Before It’s Too Late

Cultivate Your Inner Darkness Before It’s Too Late