Home » Article » Lifestyle » 12 Indicators Someone is Secretly a Sociopath
Lifestyle 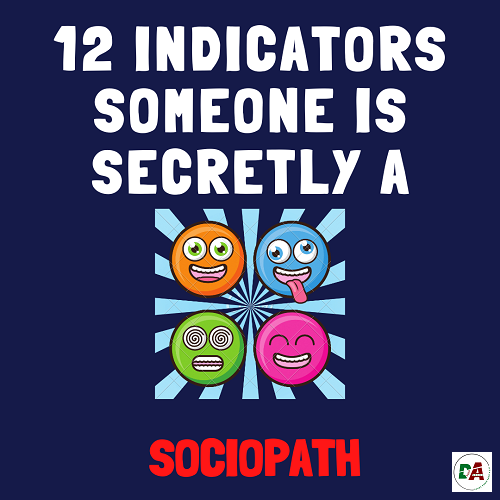 Today we are going to learn about 12 signs someone is secretly a sociopath. Now, let’s begin

Many sociopaths have an air of superiority about them. They act as if they are the most intelligent and successful people in the room, even if that isn’t true. They believe they know everything. They frequently disregard the opinions of others, and they often belittle other people’s accomplishments.

At some level, sociopaths don’t realize how other people perceive them, but general ignorance isn’t the only issue. Their sense of superiority often stems from something deeper: a lack of interest in the lives of others. Sociopaths can be self-possessed, arrogant, and profoundly selfish. In many cases, they think they’re better than other people, because a sociopath only values themselves.

Sociopaths have trouble creating real emotional connections. They may not experience empathy in the way most people do. In fact, it’s common for sociopaths to misunderstand or simply ignore other people’s feelings. Let’s say you and a sociopath get into an argument. You try to express why you are upset. Maybe the other person said something that hurt your feelings or damaged your trust. In this situation, a sociopath will not genuinely apologize for their mistakes.

They may not even acknowledge that they’ve done anything wrong. Instead, they’ll turn the situation on its head. They’ll justify their own behaviour and blame the entire conflict on you. In the mind of a sociopath, they are never at fault. They do not accept responsibility for their mistakes, and they do not apologize to the people they offend. In their world, nothing is their fault, and they plan to keep it that way.

Sociopaths are skilled people-pleasers. They shower other people with compliments, praise, and encouragement. On the surface, they are charismatic and likable, but they use their social charms to gain advantages and exploit their relationships. If you want to know whether someone is a sociopath, pay attention to the way they flatter other people.

A sociopath will praise and support anyone and everyone. They are constantly giving compliments because they need to be on everyone’s good side. For example, a sociopath will act like your best friend. They’ll talk like your number one fan. But deep down… they couldn’t care less about you. Instead, a sociopath may see you as a stepping stone to a greater advantage. If they have to shower you with compliments to get what they want, a sociopath will do exactly that.

Now, this does not imply that everyone who is positive and encouraging has sociopathic tendencies. But you may come across someone who seems a little too good to be true. There’s no guarantee, but it’s possible this person is a sociopath.

Good listeners give people their undivided attention. They demonstrate confident social skills by actively listening to people when they talk. When someone does this, you may feel validated or special. You may gain a boost of confidence and self-esteem. For these reasons, sociopaths give overwhelming amounts of attention to the people in their lives. They seem to make heavy emotional investments, and they often demand as much attention as they give.

But they will just as easily take their attention elsewhere. One moment this person can’t stop looking at you, but the next… they couldn’t care less. In other words, sociopaths don’t make emotional investments in the same way as most people. One day, a sociopath may decide that they’re bored or no longer interested in you. They’ll disappear as quickly as they came, leaving you wondering what went wrong.

If this sounds familiar, don’t settle for this hot and cold dynamic. Stable friends and partners will never rescind their emotions whenever they get distracted or bored. If you know someone who does, be careful. They may secretly be a sociopath.

Guilt is not an emotion many sociopaths experience. To experience guilt, you need to experience empathy, which is not a strong point for people with sociopathic tendencies. That’s why sociopaths don’t feel guilty about the mistakes they make. Most of the time, they simply don’t recognize what they’re doing wrong. Instead, sociopaths find ways to justify their words and actions.

Even if they do or say something that negatively affects other people, sociopaths will not register the damage they’ve done. They don’t feel sorry or remorseful, because deep down, a sociopath only cares about their own well-being.

Sociopaths are prone to dishonesty. They tell manipulative stories, lie about grand experiences, and even fabricate their deepest emotions. Sociopaths do not value the things they say, and they don’t consider how their words affect other people. As a result, many people experience a weird phenomenon around sociopathic people.

When you hear them talking, you get this instinctual, gut feeling that this person is not telling the truth. At some level, it seems like their words are empty or hollow — almost like they don’t mean a single thing they say. If this sounds familiar, pay close attention to the way a sociopath acts, because actions often reveal their true intentions. If their words and actions are sending different messages, this person may have something to hide.

Many sociopaths have trouble keeping their lives stable and balanced. For the most part, they do not take their commitments seriously. In fact, sociopaths consistently avoid their responsibilities. As a result, their lives tend to be unstable.

Most sociopaths are unemployed and struggling financially. For example, many sociopaths borrow money they have no intention of paying back. In general, sociopaths do not value their commitments or responsibilities. Instead, their impulsive personalities are drawn toward short-term rewards and superficial activities. If someone you know demonstrates a pattern of persistently impulsive behaviour, there’s a chance this person is a sociopath.

Sociopaths are always at the centre of some kind of conflict. Their lives feel like TV dramas, in which they are the main characters. But the twist is… none of these conflicts are ever their fault. If they get fired at work, it’s because their boss is incompetent. If they argue with a friend, it’s because their friend is jealous or selfish.

In other words, sociopaths are surrounded by an unnatural amount of drama; yet they refuse to take any of the blame. Time and time again, they frame themselves as victims of a cruel environment. In their minds, they are good, honest people being bullied by the rest of the world. When you hear their side of the story, it’s tempting to believe them.

Sociopaths are good storytellers whose natural charm can sway your opinions in their favour. But it’s important to keep every one of their stories in perspective. Otherwise, you will buy into their lies, giving them the sympathy and attention that every sociopath craves.

Since sociopaths don’t take responsibility for their mistakes, they never learn how to grow or improve. When something goes wrong, they avoid all mention of their personal failures. So, they make the same mistakes over and over again.  From the outside, it feels like these sociopathic personalities are walking in circles. You hear them complaining about the same problems, day after day. They get a new job. They make new friends. Yet they experience the same issues. Why? Because sociopaths are unwilling, and often unable, to learn from their failures.

Every once in a while, you will catch a sociopath making a mistake. They may lie about something obvious or fail to take responsibility for something they said. You may get angry at them and start thinking to yourself, “why do I spend so much time with this person?” But feelings like these never last long. Why? Because sociopaths are very skilled at winning people over. They can and will manipulate your feelings using charm, praise, and empty charisma. Anytime you feel angry with them, they will find ways to talk you out of your anger, even if that means lying through their teeth.

To a sociopath, all that matters is that they stay on your good side. They’ll say and do anything to win you over. Unless you see through their hollow compliments, there’s a good chance this sociopath will sweep you off your feet.

So, keep your wits about you. If you’re angry, remember why you’re angry. If they make a mistake, don’t let them sweep that mistake under the rug. Each of these mistakes are big red flags, no matter how often a sociopath tells you otherwise.

Self-control does not come naturally to a sociopath. They have a hard time ignoring their short-term desires in favour of long-term rewards. So, it’s common for sociopaths to behave without considering the consequences of their actions. If you know a sociopath, you may be familiar with their reckless behaviour. They act without thinking, and they never plan ahead. They allow their impulses to control their life, even if that means damaging their relationships.

If you’re friends with this reckless personality, you may feel like it’s your job to slow them down. You may feel like you are the only voice of reason in their life. But no matter what you say, a sociopath will always follow their instincts.

If someone is secretly a sociopath, you may be able to identify red flags by looking at their relationships. Sociopaths may not experience real emotional bones with their friends and partners. Instead, they create relationships in order to exploit the people in their lives.

For example, sociopaths often take advantage of their friends and partners by asking for favours and displacing their responsibilities. In the mind of a sociopath, relationships are tools they can use to push their own agenda and gain social reward. If you notice this toxic behaviour in your life, someone you know may secretly be a sociopath.

12 Types of Touches and What They Mean