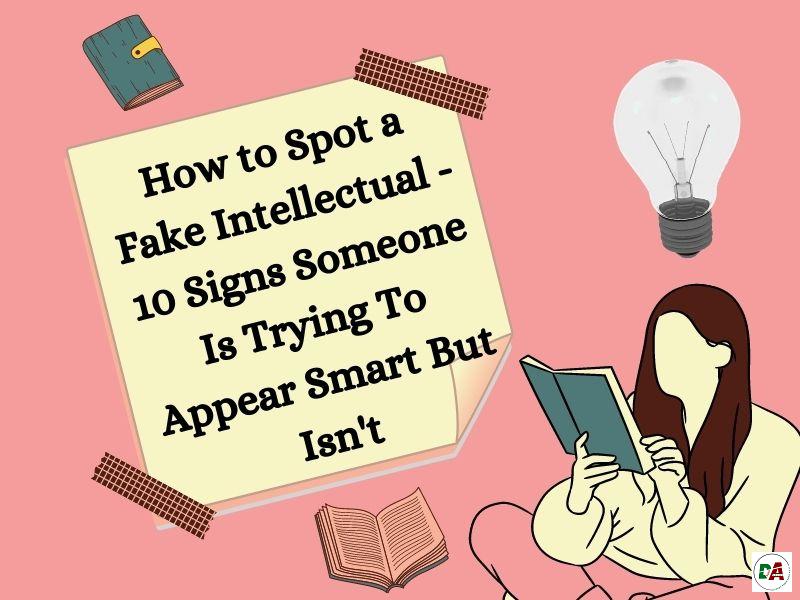 You know those people who make you wonder whether they actually know what they’re talking about or if they’re just a smartass? Of course, it’s always a good idea to give someone the benefit of the doubt before passing judgement or jumping to a conclusion. But how can you tell which category a person falls into?

1. They Seek to Impress, Rather Than Inform

A pseudo-intellectual is usually more interested in impressing you with their brilliance than actually informing you. You could be having a light hearted conversation, only for them to disrupt it by changing the topic and then throwing in all of the intriguing facts and details they know about it. Even if it’s inappropriate, these folks will seize every chance to show off their knowledge.

2. They Just Know It All

The pseudo-intellectual always has something to say about everything. Even if they weren’t part of the conversation to begin with, they seem to have all the answers. You’ll know you’re dealing with a smartass when they suddenly become an expert in everything. One moment, they may be an expert in medicine and later an expert in economics, or even a pro sports analyst during a sporting event.

When you’re having a discussion with someone about a topic you don’t know much about, they always win. However, the frequency with which the pseudo-intellectual mentions or brags about their qualifications is often enough to raise doubts about their credentials.

3. They’re Quick to Have an Opinion

The desire to be right drives a pseudo-intellectual to quickly form an opinion on any subject. And, they typically regard their own personal viewpoints or opinions as absolute truths even though there are always alternative perspectives and opinions available.

Instead of admitting that they don’t know enough about a subject to have an informed opinion, they form an opinion regardless and defend it fiercely.

Pseudo-intellectuals feel the need to let everyone know that they are right even in the most insignificant interactions. And what better way to demonstrate their intellectual superiority than by debating and arguing? Whether you’re discussing politics, religion, technology, or any other topic, the pseudo-intellectual is always ready and willing to engage.

Since being right is more important to them than anything else, they love to provoke debates, despite the fact that this creates tension and generally ruins the vibe.

5. They Are Unable to See Other Points of View

Genuine intellectuals recognise that the best approach to becoming more knowledgeable on a topic is to listen to what others have to say about it. Smartasses don’t do this because they don’t want to sabotage their self-image as someone who already knows everything. Since they deem their personal views as absolute truths, they’re unable to see other perspectives.

During a discussion or debate, they are typically preoccupied with formulating a counter-response rather than listening to what the other side has to say. For this reason, arguing with such an individual is rather pointless. You’ll just wind up going around in circles, with no end in sight.

6. They Are Masters at Posing Questions

You can gauge a person’s level of smartassery by the way they respond to questions. Someone who refuses to accept that they don’t know something, or fails to respond directly while claiming total control of the situation, is not a genuine intellectual.

In order to look superior, a pseudo-intellectual will respond to a probing question with an abstract question, or they’ll ask questions that can’t be answered.

Pseudo-intellectuals are not only quick to form an opinion, but they are also ready to share it with the rest of the world. Rather than listening and digesting what other people are saying, they prefer to hijack conversations.

They blatantly interrupt the person speaking to give their own thoughts on the subject and leave little room for others to participate in the conversation. They do this any chance they get, regardless of the subject matter.

8. They Use Big Words Unnecessarily

To spot a pseudo-intellectual, pay close attention to their use of language. You’ll notice that they want you to be impressed whenever they speak! These folks often use complicated words as a subtle way to demonstrate how smart they are.

They also like correcting other people’s minor grammatical errors and mispronunciations. The smartass even has a set of intelligent-sounding quotes and citations on hand, and they use them to make their argument stronger and to appear more knowledgeable.

Intelligent people like what they like. Simple as that. They aren’t trying to impress others with their interests. But, remember, image is everything to the pseudo-intellectual! And they simply don’t have the strength of character to not care what other people think about their choices.

Their self-esteem is tied to what other people think of them. So, they often claim to enjoy classic novels and highly cultured things like opera, ballet, or theatre.

10. They Have No Intellectual Pursuits

Genuine intellectuals will generally put years of hard work into their intellectual pursuits. They are truly passionate about their work, and they’re eager to study and discover more about their preferred subjects. The smartass, on the other hand, gets excited when they think you assume they’re intelligent. That’s all that really matters to them.

So, if someone is trying hard to showcase their intelligence while having put little effort into intellectual pursuits, there’s a pretty good chance that they’re a pseudo-intellectual! Like it or not, you’ll find yourself crossing paths with pseudo-intellectuals. And the best way to deal with them is to call them out.

Now, there is a right way of going about this, assuming you want to diminish the person’s annoying habits while remaining friendly with them.

When you call someone out, it’s better to focus on their conduct rather than on who they are as a person. Instead of calling them a smartass or a pseudo-intellectual, point out what they’re doing and assure them that they don’t need to act like that, because you like them no matter how intelligent they are. They’ll have no choice but to tone down their behaviour, at least around you.

After reading this article do you think you’ll be able to spot a pseudo-intellectual? Have you ever come across one? Did you confront them? Let us know in the comments below!

10 Signs You Have A Fear Of Intimacy