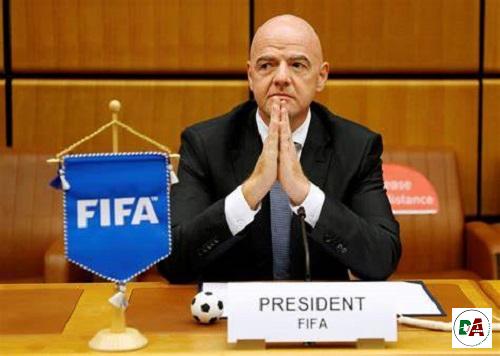 FIFA president Gianni Infantino has called on Russian leader Vladimir Putin to engage in dialogue and stop the war in Ukraine.

Infantino, who received an Order of Friendship medal from Putin in 2019, a year after Russia hosted the World Cup, was speaking at the FIFA Congress in Doha where delegates from the Russian Football Union were controversially present.

The Russian men’s football team had been due to take part in the play-offs for a spot at the 2022 World Cup, but were banned from international competition pending an appeal, amid the country’s war in Ukraine.

The Russian Football Union is said to be considering leaving UEFA, with Asia’s AFC confederation a potential alternative.

“Now that we are seeing light at the end of the tunnel (on the Covid-19 pandemic), what happens now?” Infantino said in his speech to Congress. “War. War with the fear of a global conflict.

“Innocent people are suffering and dying. We live in an aggressive world, we live in a divided world. But as you know I am a big believer in the power of football to bring people together and to cross-cultural boundaries.

“Nelson Mandela said the sport has the power to change the world. Football is the world’s sport, but at the same time we are not that naive to believe that football can solve all the problems, of course not.”

Infantino added that: “I’m very sad of course for what is happening, and I’m as devastated as everyone.”

“We had to suspend Russia and Russian teams. It’s not an easy decision of course, because it’s about people who love football.

“We had to take the decisions, and now we have to look forward and hope the hostilities can stop, and we can bring a little bit of peace.

“The decision on Russia has been taken. The Russian Football Union has appealed the decision to CAS [the Court of Arbitration for Sport] so we are waiting for the result of the CAS deliberations.

“We will see what comes next. I sincerely hope the conflict can end, and we would be there on the first day to play football again because that’s what I think is needed in this country.

“Russia as a football union, like any other federation, has not been suspended as such by FIFA, it has been participating in this congress as well.”

Russia hosted the 2018 World Cup, and now Qatar, whose qualification as suitable hosts has frequently been called into question, will stage the tournament this November and December.

Asked whether Qatar would be awarded a World Cup based on what FIFA considers are now increasingly robust methods of deciding who should be hosts, Infantino tried to remove himself from it.

He initially distanced himself from the decision that was made in 2010, when Sepp Blatter was the governing body’s president.

“When it comes to the Qatar World Cup, the decision has been taken now 12 years ago, when I was far away from FIFA happenings in these days,” said Infantino, who was UEFA secretary-general at the time.

“We’ve now put in place a different bidding process, which I think is also pretty unique, and like I said in the past, bulletproof.

“We still see even in these decisions there are political votes rather than factual-based votes. That’s probably part of the game.

“When it comes to Qatar, the decision has been taken. We’ll organize the best World Cup ever here in Qatar, and in any case, we shouldn’t go back. We should look forward, and we should look at what has happened.

“All the changes that have happened in this country in terms of workers’ rights and human rights, and so on, would not have happened or certainly not at the same speed without the projectors of the World Cup being there.”

Speaking about Qatar, whose records have been criticized by human rights organisations, Infantino said the tournament would “show to the world there are people living here”.

“You can come here and feel safe and be safe”.

English Premier League clubs to use five substitutes from next season

Russia causes jitters in Ukraine as it commemorates WWll